On Saturday the 29th of December I was dropped of at Michael Sinclair's house where we were about to head of on a days birding adventure. We headed of just before it was bright outside. We decided to start by heading to Strathclyde Loch where a regular returning Ring Billed Gull had been seen. We spent about two hours looking with no luck. No one was able to see it this day. However we had some very nice Common Goldeneye and Goosander which were very close into the banks.

We then decided to give up and we headed over to Musselburgh Seawall where lots had been reported. We started with lots of Goldeneye, Carrion Crow and Curlew in a river flowing into the sea. There was also Black Tailed Godwit, Dunlin and I was able to find some Sanderling in these flocks. On the sea there was incredible numbers of Eider, lots of Goldeneye and some lovely Velvet Scoter close in. We were also fortunate enough to find some Male Long Tailed Ducks which are very nice birds. However we had sadly dipped Surf Scoter, Black Necked Grebe and Slavonian Grebe which had all been seen the day before.

We then decided to try Aberlady Bay because there was meant to be a lovely pair of Shore Lark near the golf course. Sadly we were not able to see these but we had a large mixed flock of Golden Plover and Lapwing. We spent about 30 minutes searching with no rewards so we decided to head to Slamannan where there is regular groups of Taiga Bean Geese. The geese can be in any fields in this large area. Michaels dad was going to show us where he saw them as we are driving I notice a flock of Pink Footed Geese. We get out to check them and have seven lovely Taiga Bean Geese feeding in a field by the side of the road. This was a lifer for Michael and a year tick for me putting me onto 239 for the year.
Posted by CalumMckellar at 1:26 PM No comments:

On Tuesday the 21st I went to RSPB Minsmere in hope of seeing the Semipalmated Sandpiper. I started by heading towards the pond were I saw a Water Vole. We then headed to the North Wall were a Golden Plover flying over as well as lots of Sand Martins that were flying over head. As I was walking towards the sea a great surprise was a pair of Great White Egrets flying out roughly behind the Wildlife Lookout which came as a shock for me as I was not expecting to see them there.

I then got to the beach were I had my first ever Graylings which is a small butterfly that has very good camouflage when its siting on the ground. As I was walking along I had my eyes to the sea were a flock of about twenty Wigeon went past then two Sandwich Terns flew through followed by a singular Oystercatcher there was also a lovely male Stonechat in the bushes 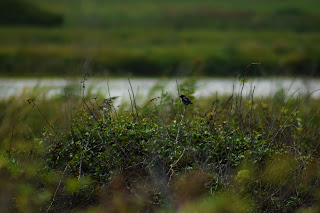 Stonechat.
We then headed into East Hide were there was lots of Avocets, a few Snipe, a Common Sandpiper, a Hobby over the back, some Black Tailed Godwit and three Greenshanks that flew in calling. There was a few of the feral Barnacle Geese sitting on the scrape.

We then headed for the Sluice however there wasn't anything in the bushes but there was lots of House Martins and Swallow there was also four Kestrels flying around each other.

We then walked into the South Hide were I was put on to the Semipalmated Sandpiper within a minute. This was my 272th lifer I then meet David Walsh and his friend in the hide. Here he showed me the differences between Common and Spotted Redshank as there was lots of them around the scrape there was also a large group of Common Terns and Little Gulls with some juveniles in it. 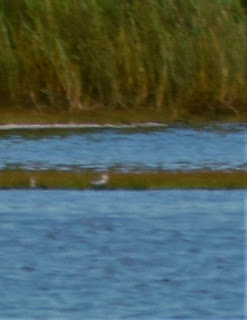 We then walked to Wildlife lookout where we had a Brown Hawker, a Migrant Hawker, a Marsh Harrier and a surprise Greater Silver Diving Beetle Larva which I almost stepped on. I wasn't sure what it was at first then David started telling us about it saying it is poisonous and squeaks if it is touched. 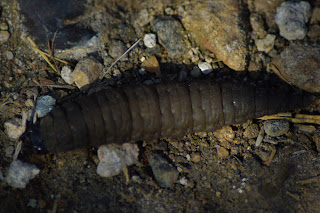 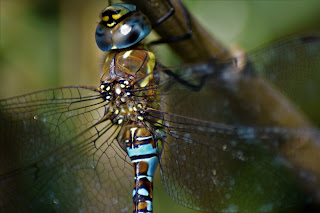 Migrant Hawker
We then walked into the Wildlife Lookout where there was some Green sandpipers, a Greenshank, Juvenile Great Black-backed Gulls, and a very odd Ruff that had a white head and brown body. this was a nice looking bird. Then a Great White Egret dropped in behind the hide however we were looking into the sun but it was still nice as it was a lot closer than the last two.

We left the hide and started walking to the North Wall to look for Bee Wolfs on the way we had four+ Willow Emerald Damselflies which David put in his scope that made them look incredible. We then walked to the North Wall were I saw my first Bee Wolfs. David told us that Bee Wolfs catch five Bees and drag them down there hole then once there is five they will lay one egg and they cover the hole over and leave the eggs to hatch and feed on the bees.

We then headed to Island Mere where we had another Great White Egret and some Bearded Tits. 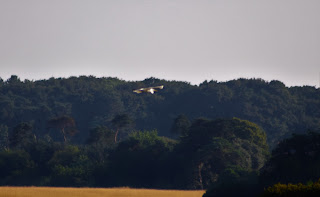 We then headed to Weselton Heath where we saw more Graylings six Stone Curlew four Woodlark and a Dartford Warbler. 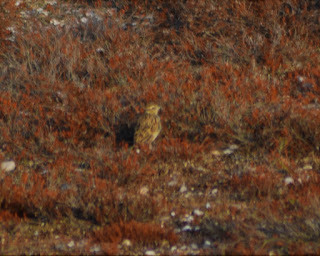 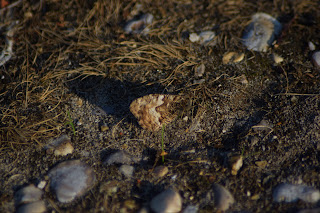 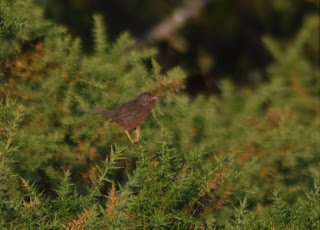 Dartford Warbler
In total I saw 67 species of bird on a great day out Minsmere is definitely one of my favourite reserves.

Posted by CalumMckellar at 4:16 AM No comments:

Today I  went to RSPB Dungeness to see what I would be able to see. 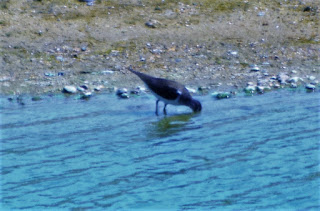 We then went to the dipping pond where there was constant Common Tern flying over I also found my first ever Grass Snake and my first Marsh Frogs which there was lots of in the pond. 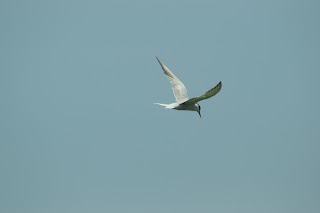 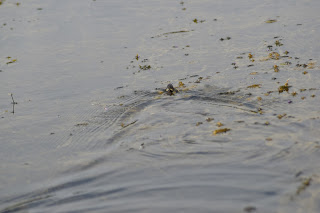 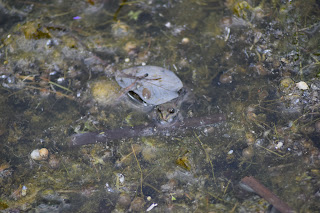 We then walked to the Firth Hide. Where two Black Terns were reported. I walked in and there was three Common Sandpiper, a Lesser-Black Backed Gull, a bunch of Common Terns, a distant Yellow Wagtail flew over and five Ringed Plover and a Lapwing. At one point all the terns and Gulls flew up and then when they all landed I found the Black Tern which must of flew in when all the gulls and terns were up. This was a year tick for me which put me at 201 for the year. 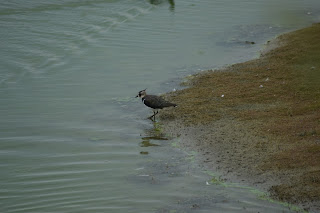 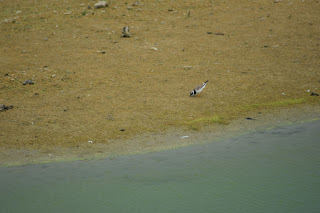 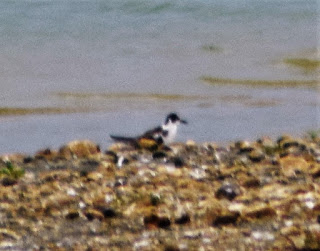 Today I headed to Essex to hopefully see my first ever Ferruginous Duck because one had been seen from the Bay Hide. This was my first ever visit to Abberton Reservoir and as you can tell I was unsuccessful in seeing the Ferruginous Duck however it was still a fun trip. We started of by heading to the Island hide. We saw lots of Goldfinch on the way to the hide. When we arrived in the hide there was a large group of Starling in front of the hide there was also lots of Yellow Wagtail, a few Stock Doves, Cormorants, Pochard, Tufted Duck, Canada Goose and massive groups of unidentifiable wildfowl on the other side which were too far and in a heat haze which made them unidentifiable. As I was about to leave the hide a pair of Garganey flew past towards the Gwen Hide.

We then walked around to the Island Hide on the way I found a Common Whitethroat. As I walked in there was a large amount of people who thought they had it however it was just an odd Tufted Duck. There was not much in this hide but another Garganey flew around back to the Island hide. We then went around to the Gwen Hide on the way there someone pointed a Barnacle goose which would of most likely been a feral bird.

I the Gwen hide I saw all the usual bird that are on the reserve plus a year tick of an odd looking Red-Crested Pochard. This means my year list is now on 200 species. We also had Egyptian Goose and a surprise Pintail which were new for the day.

We then drove round to the causeway where the Great White Egrets are however we only saw Little Egret, Grey Heron, a Lapwing and a Lesser Black Backed Gull as well as the regulars.
Posted by CalumMckellar at 8:58 AM No comments:

Yesterday I went to Otmoor near Oxford with my dad. We arrived at about 09:30. This was my first visit to Otmoor so I was very exited. I headed down the roman road track in search of butterflies and dragon flies. It  was incredible I saw loads. We saw Southern Hawker, Ruddy Darter and Black Darter. Then the butterflies I saw were Meadow Brown, Gatekeeper, Green-veined White, Purple Hairstreak, Speckled Wood, Brown Hairstreak, Painted Lady and I found a Purple Emperor which is a very rare butterfly for Otmoor. This was there third of the year and the next record before them was five years ago. 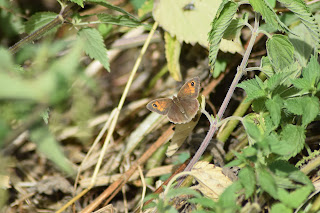 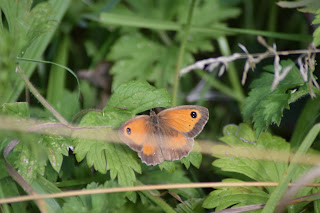 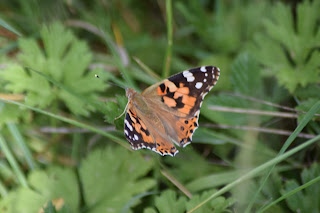 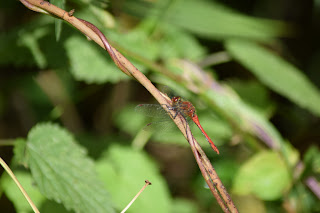 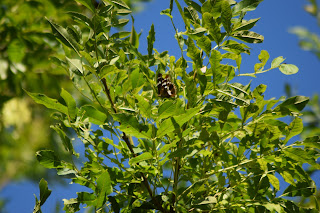 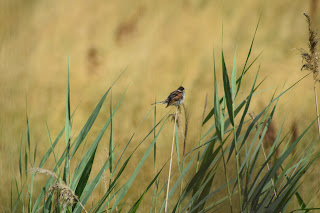 I then headed along the greenways scanning looking for Common Crane how ever I could not find the pair. Their Chick was sadly predated after about  six weeks which is the longest the Otmoor chick has ever lasted. When walking along I had a female Marsh Harrier, male Reed Bunting, Grey Heron, Common Buzzard, Reed Warbler, Blue Tit and Great Tit. I got to the Turtle Dove feeding station and to my delight there was an adult which I accidently flushed it then it flew into the bushes. I then walk back along the roman road to get back to the car park where I saw a family flock of Long-Tailed Tits and a female Bullfinch. I really enjoyed Otmoor and would recommend a visit to any one who has never been  before.
Posted by CalumMckellar at 3:56 AM No comments:

Email ThisBlogThis!Share to TwitterShare to FacebookShare to Pinterest
Hello and welcome to my new blog on here I will be creating posts about my exciting adventures looking for wildlife in and out of the UK.
Posted by CalumMckellar at 6:02 AM No comments:

Hello I Am Calum McKellar I am a young birder from the UK and this is my blog where I will take you on some of my adventures I go on looking for wildlife.